Marc Jacobs, Louis Vuitton and Gucci boogie back to the 70s!

We can’t help but notice that the 70s are back big time on planet fashion, with Marc Jacobs, Jacobs for Louis Vuitton and Gucci all paying homage in their spring/summer 2011 collections. The intoxicating, high-octane glamour of Yves Saint Laurent’s opulent Opium collection of 1977 appears to be a key inspiration – luscious mandarin-chic jade green and amethyst satins, cheongsams, gold cummerbunds, all sported by models with Chinese lacquer red lips and nails – not to mention the high-gloss disco era aesthetic of Guy Bourdin.

But the looks of the decade we love to love – as 70s Style & Design celebrates – were fabulously eclectic. And accordingly this summer’s 70s revival also treats us to folky Kenzo-esque attire (D&G), the pared-down, hard-gloss glamour of Helmut Newton (Lanvin), while last year’s army/utility look is in full force (Jil Sander for Uniqlo). And, we needn’t mention, the high street is utterly in thrall to ankle-skimming skirts, lace-up-the-leg wedge espadrilles, eye-shading wide-brimmed hats…
Here’s our geek peek at the 70s references these collections make…

Sashaying through the 70s at Marc Jacobs 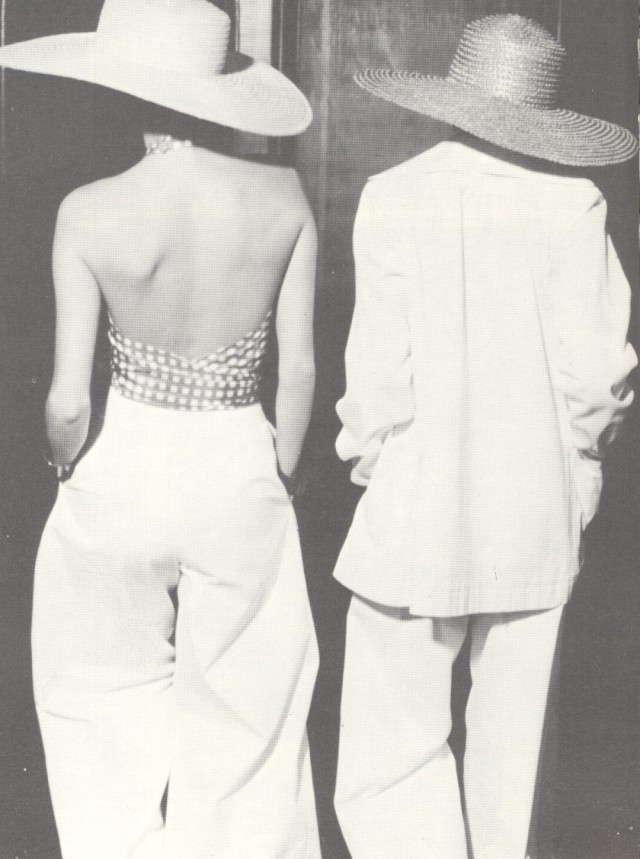 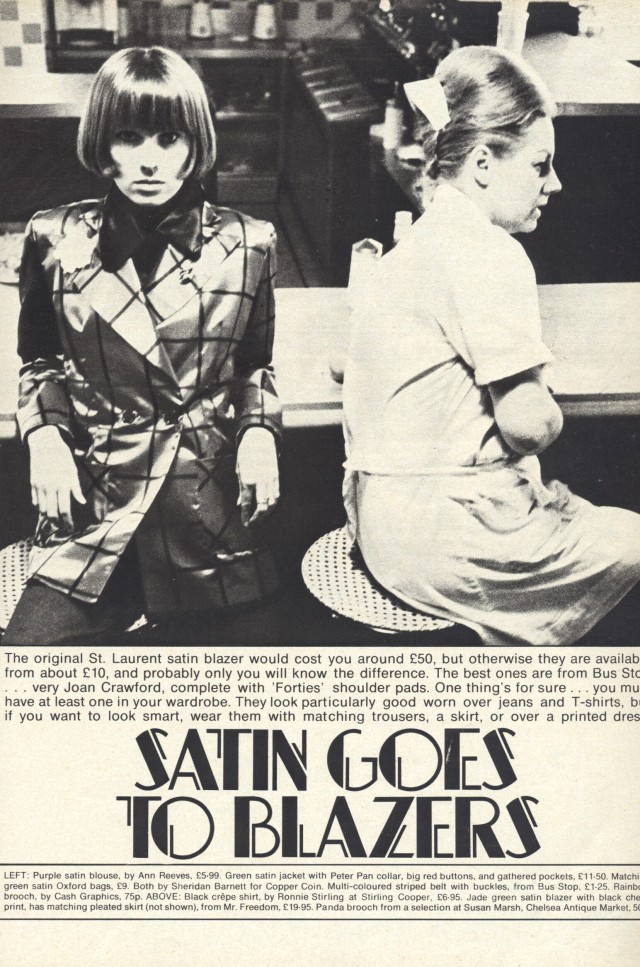 19 magazine showcases 71's must-have satin blazers, including this one by Tommy Roberts's Mr Freedom label, which came in jade green

Vamping it up, Biba style 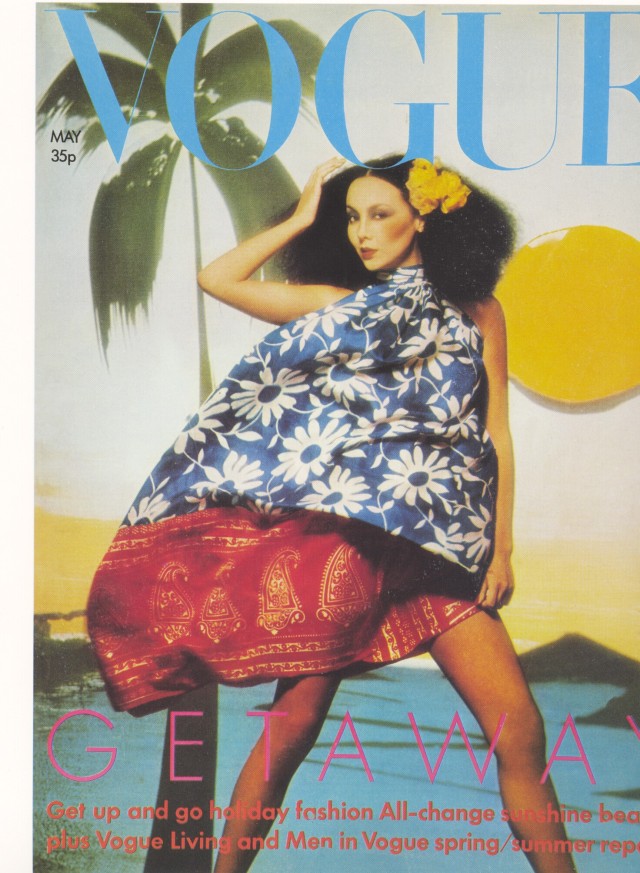 Lanvin – Helmut Newton hard gloss
Lanvin’s ad campaigns are a dead-ringer for Helmut Newton’s iconic 70s fashion shoots featuring women enacting stylised catfights, one of which appeared in Nova in 1975. And as a design aside, the Deco-tastic apartment they’re shot in evokes the Deco-filled Paris flats of Saint Laurent and Karl Lagerfeld in the 70s. 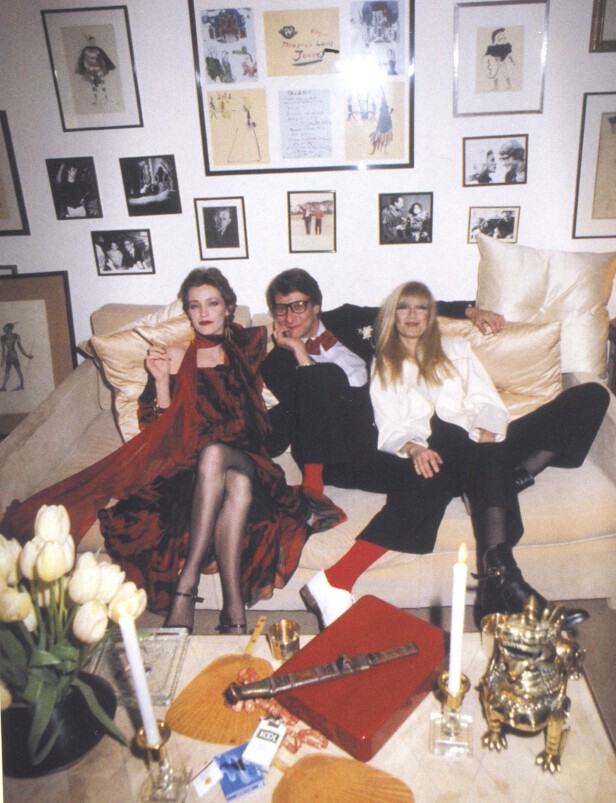 Toughing it out for Herr Newton in Nova magazine, 1975

Attenshuun!
As the above pic shows, utility was huge circa 1975, with designers taking inspiration from the cheap but chic clothing of army and navy surplus stores. And it’s still marching on…

But you saw it here first… 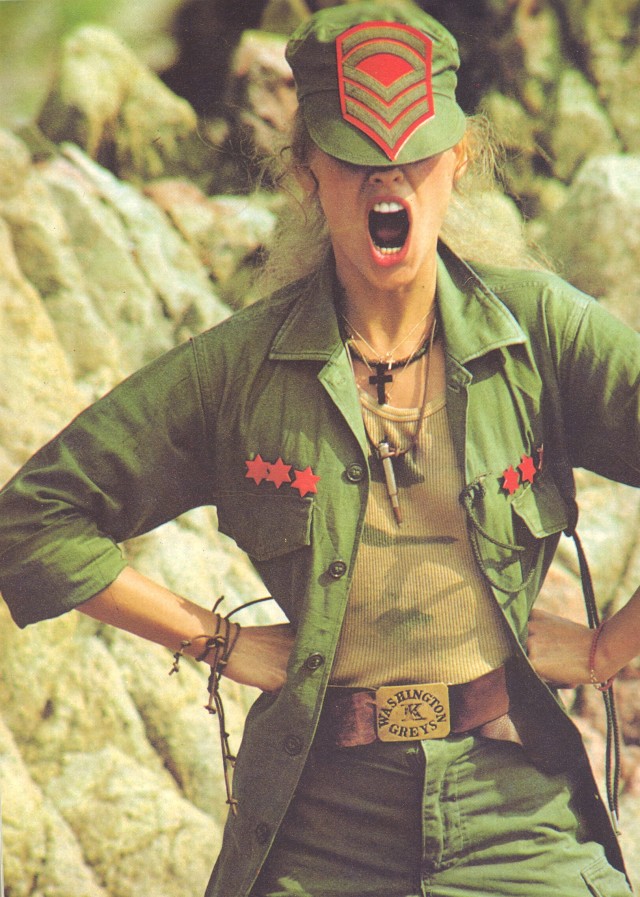 However it’s not all hard edges and glossy surfaces in this revival: D&G’s women’s collection was softer, more girlish: redolent of Kenzo (the outsized florals), Laura Ashley (the flouncy, ankle-skimming dresses) and even Mr Freedom (denim, checks and big fat flares and platforms). And, in contrast to the fierce expressions of Newton’s pugilistic models, the girls in this D&G ad campaign recall the breezy joie de vivre captured in the fashion pics of a very different 70s snapper – Oliviero Toscani.

Kenzo's take on the prairie look, snapped by Peter Knapp in 1973

This entry was posted in 70s celebrities, Fashion. Bookmark the permalink.