The early 1970s Glam era is the subject of Glam! The Performance of Style, a far-reaching exhibition at Tate Liverpool (from February 8 to May 12), encompassing art, design and fashion. Mention the word Glam and images of meathead lads stomping about on Top of the Pops in incongruously ill-fitting Bacofoil jumpsuits usually flash into our minds. Yet, as Glam! reveals, the looks of Slade, Sweet et al were the commercial fallout of highly sophisticated ideas cultivated by a minority of avant-garde creatives in the US, UK and Europe. And, as the chapter Avant Garde in 70s Style & Design highlights, too, the Glam sensibility was multilayered and deeply rooted in radical social changes shaking up ideas about taste and lifestyles.

Glam! explores both the roots and multifarious manifestations of the Glam sensibility, from 1971 to 1975. This drew no puritanical distinctions in the arts between fine art and fashion and style. It also celebrated androgyny, a certain camp irony, artifice and – encouraged by the fun-loving, 60s pop movement – flouted conventional, dull ideas about ‘good’ taste, expanding people’s aesthetic horizons by suggesting that kitsch, too, could be stylish.

Typifying this sophisticated sensibility in the mid-70s were the Moodies, a predominantly female group of Reading University art students, whose style is showcased in Glam!, and whose performances blended cabaret, pantomime, Dada and performance art. They also revelled in pastiche and parody, singing cover versions of such pop classics as the Shangri-Las’s Remember (Walking in the Sand). 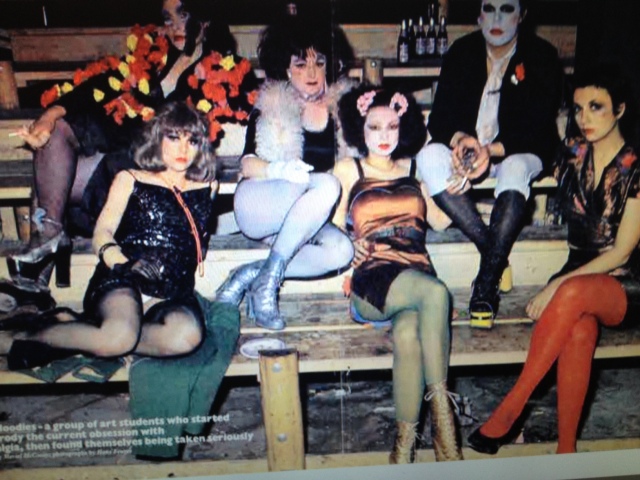 A major inspiration behind the Glam sensibility were the gay rights and feminist movements of the early 70s, which challenged sexual stereotypes and gave greater visibility to the taste and styles of previously marginalized subcultures.

Art schools also played a huge part: between the early 60s and early 70s, the number of students attending them shot up by 70 per cent, and the worlds of fashion and fine art frequently collided. Artist David Hockney and fashion designer Ossie Clark, who both studied at the Royal College of Art, were friends, and Ossie was the subject of Hockney’s iconic double portrait of 1971-72, Mr and Mrs Clark and Percy (featured in Glam!). 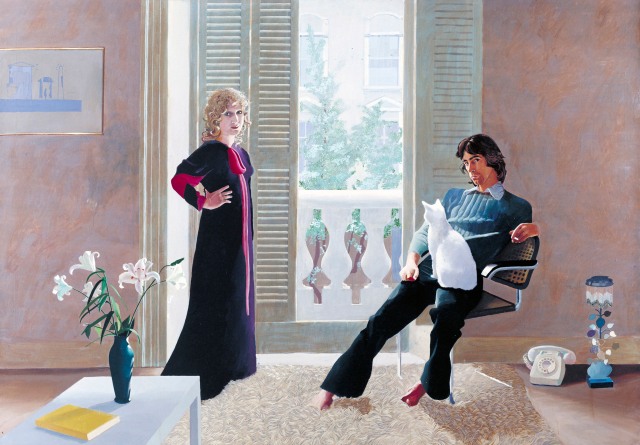 Other influences included Susan Sontag’s 60s essay Notes on Camp, which defined camp as ‘a love of artifice’ and as the ultimate ‘metaphor of life as theatre’. Indeed, the Glam spirit rebelled against the 70s’ hippie counterculture, its accompanying back-to-nature movement and earnest quest for authenticity. To the (mainly urban) avant-garde, such authenticity was deluded: what about all those weekend hippies? And where was their sense of humour? Many hippies were also patriarchal in their attitudes – so much for revolutionising society!

One of glam’s chief muses was the deliciously deadpan Andy Warhol, whose entourage included his posse of ‘superstars’, such as transsexual Candy Darling and sassy models Donna Jordan and Pat Cleveland. David Bowie was wowed by Warhol’s early 70s play Pork and its kooky cast of freaks. Another fan was John Waters, whose own actors in his company, Dreamland Films – including drag queen Divine – were oft-compared to Warhol’s coterie.

Elsewhere, the Cockettes, those legendary LSD-taking, cross-dressing, San Francisco-based (and not so po-faced) hippies, also epitomised the Glam sensibility, while in London, the Glam spirit blazed bright at the Alternative Miss World contests organized by artist Andrew Logan. At these camp cavalcades, the eccentric contestants – including film-maker Derek Jarman and fashion designer Rae Spencer Cullen (whose label was called Miss Mouse) – made their surreo-kitsch, often drag-based outfits themselves. In fact, performance and theatre were a key influence on the Glam movement. David Bowie’s Ziggy Stardust alter ego was hugely inspired by his teacher, the flamboyant mime guru Lindsay Kemp, after all.

The exhibition Glam! features work by many of the aforementioned, including Hockney, Jarman and Richard Hamilton. But it also showcases pieces by other artists, such as Duggie Fields, Margaret Harrison, Marc Camille Chaimowicz, Patrick Procktor, Cindy Sherman, as well as lesser-known names: ASCO, Ulay and photographer Peter Hujar.

Take it from Glam! Style can have substance!

This entry was posted in 70s celebrities, Art, Fashion. Bookmark the permalink.